In the context of everyday life, choices are made at every single moment and these choices are made by conscious and unconscious, as well as logical, illogical and arbitrary modes of decision-making. My recent work has been concerned with exploring the ways in which individuals approach everyday situations and the internal logic behind the choices they make.

I must first contextualize my approach. As a human being, I have always had a very hard time making decisions, both major and minor. I am interested and astounded by the way that other people can just decide on something. I never understood how someone could “just decide.”

“Ever since the ancient Greeks, assumptions have revolved around a single theme: humans are rational. When we make decisions, we are supposed to consciously analyze the alternatives and carefully weigh the pros and cons. In other words, we are deliberate and logical creatures. […] There’s only one problem with this assumption of human rationality: it’s wrong” (Lehrer, Xv).

The act of deciding does not necessarily mean that every option has to be considered and evaluated. Rather, deciding often involves an oscillation between reason, emotion, impulse and chance, an act that is constantly navigated and negotiated. My work thus far has concentrated on the notion that decisions are mostly made through a logical process, and the outcome of a choice is based on specific reasons. More recently, I have begun to examine the equally important role of the arbitrary in the decision making process.

When logic or reasons are no longer paramount in a decision, arbitrary modes of decision-making come into play. Arbitrary modes of reasoning combine the subjective and random methods of making a choice. In this body of work I am investigating the notion of the arbitrary through modes of random decision-making and the tools that support that process. Tools, such as the magic eight ball and the cootie catcher or fortune teller, have been created to facilitate the process of reaching a definite decision through a random, objective sequence that ultimately lead to an answer to a question, a yes, no, or maybe. It is these devices that are the subject of this series.

In all forms of decision-making, there is a transformation of the insignificant into the monumental. Whether rational or random, a series of minor considerations eventually lead to a decision that transforms and shapes future actions and decisions. It is this transformation that is at the core of this work. The key piece, a fortuneteller, is modeled on an origami sculpture used in a game where a player executes a specific process to facilitate an answer to an initial question. When the game is played the decision will be found under one of the inside flaps. In this work the small, lighthearted paper game takes on mammoth proportions as a wooden sculpture through the medium and processes of printmaking, specifically woodblock. Static in time between a question and an answer, the work reveals a process rather than a definite resolution as the climatic point of the game, the decision remains isolated, hidden behind one of the inside flaps. The large scale of the work shapes and transforms the physical space in the same way methods of decision making occupy our mental capacity.

The series of prints work with notions of the matrix. The patterns and maps are created through the eight ball outcomes and the paper folds of a fortuneteller game. However, the patterns and maps are inherently flawed. Arbitrary factors inhibit the works as the outcomes within the pattern from the eight ball become illegible and the map lacks pieces essential for construction. In effect, the decision makers fail to facilitate a singular outcome or decision as they are inherently trapped within their own processes.

In this work the negotiation of a decision is brought to the forefront through the interplay of rational thought and arbitrary processes. In effect, I am looking at the ways in which modes of reasoning rely on the subjective and the objective and their constant negotiation. In this work the arbitrary evokes the random within the personal, and perception is the tool with which reasons and facts are filtered. This work highlights the significance of decision-making, from naïve to mature, random to ordered, illogical to logical and insignificant to monumental. 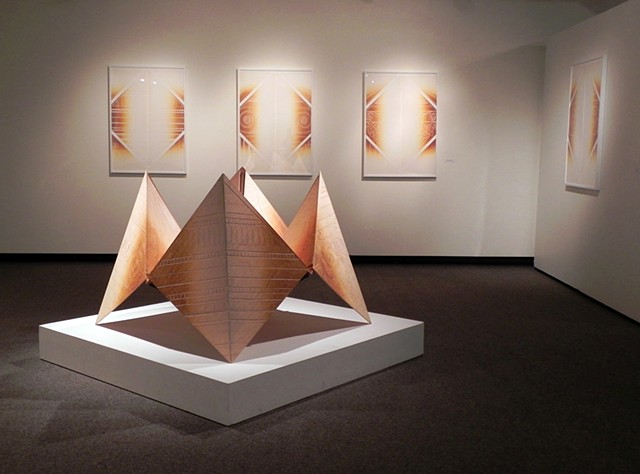