Portfolio > "The Usual" A Create Your Own Adventure Story

The character intended to buy a chocolate chip cookie, because, well it had been a hard day and the fresh steaming cookies in the window of the store were just too delicious to resist. It was one of those days when even waking up had gone wrong. There was a stupid song on the radio and the volume was too loud and then after drifting back to sleep the irritating sound of excessive laughter on talk radio at six in the morning was just too much to handle. After that everything went wrong, even if nothing really happened it was all tainted by the disdain they felt for the day in general. But the cookie looked really good and was the size of their head so they hoped that this may change things. A cookie seemed to satisfy the need for a large comforting hug that was just a little too much to ask of a stranger. An order of tea to go with the cookie was purely in response to non-existent peer pressure from the person in front of them; they just looked so content with their order, and it was fairly cheap so they just “dittoed” the order and added a cookie. An easy order was actually one of their favourite things in the world, so things were looking up.

The tea was hot; it could be easily felt through the cardboard cup even with the weird paper ring. About seven seconds of poured sugar from the jar was added along with a splash of milk (the milk because they were on a relatively lax diet). They stirred it for maybe a little too long while gazing into the swirl, and then remembering where they were, they took a lid for later and sat down.

The tea was still too hot to drink but the cookie was the perfect temperature, still warm. Laying out two napkins for a plate and wiggling their butt a little to get perfectly comfortable, they readied themselves for the deliciousness. They broke off the edges in small bite-sized pieces, and ate each one, one at a time working in a clockwise rotation. Just then they remembered again that they were in public and had to be aware of their expression and the fact that they were just staring into nothingness. They took a short break to let things settle and enjoy the tea, still a tad too hot but perfectly steeped.

Back to the cookie, after eating the perimeter, they then proceeded to eat towards the inside, still in a circular motion, eating some chocolate chips but leaving the largest cluster of chocolate chips until the very last bite. After thoroughly savouring that last taste of deliciousness, they sadly put the lid on their tea and began to drink and contemplate. 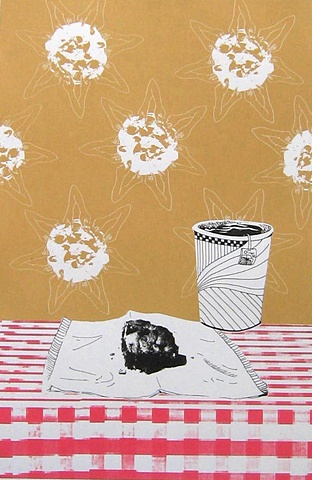 Large Chocolate Chip Cookie; to be consumed according to the best for last strategy for consumption, where the perimeter of cookie is eaten first in a clockwise manner and then the rest is eaten leaving to the last a bite full of chocolate chips
Screenprint
22x30 inches
< previous next >