Portfolio > "The Usual" A Create Your Own Adventure Story

The character lingers away from the counter, and wonders what would be the most substantial item they could possible purchase with the dirty change left in their pocket. Grudgingly, they order a bowl of chicken noodle soup, despite their deep rooted and completely irrational hatred of soup. They blow impatiently at the liquid mockery of their failure. Angry at life's habit of always delaying their gratification, they grab the spoon and takes a hearty mouthful of the scalding hot, unbearably salty broth and rubbery noodles that reminds them exactly why their hatred of soup is not so unfounded. Cursing, they throw the hot metal spoon back into the bowl with a splash. As they glower into the incredible bowl of soup that was purchased with the last dollar in their possession, they catch a glimpse of their disheveled and disillusioned appearance on the surface of their lost lunch. They hold their own gaze in the rippling amber waves of chicken broth, and wonder at how quickly their life went from private golf clubs, bottomless bank accounts, and endless opportunity to sitting penniless and friendless in a strange city far from home. Their stomach heaves an almighty grumble, and they open the tiny package of crackers and lay them out to begin their routine for eating the rest of the soup, trying not to think of piss and worms. There is one thing and one thing only that they can appreciate about soup – the pleasant feeling of ‘warm-soup-belly'.

They begin the routine for consuming the chicken noodle soup, which must be consumed while hot and with a large soup spoon on hand, best for containing copious amounts of noodles balanced with enough broth. While waiting for the soup to cool, they spread butter over crackers (Saltines work best) and place them on a plate beside soup bowl. Once soup is the right temperature, they proceeded to dip crackers in soup, watching the butter will melt and ooze from cracker. 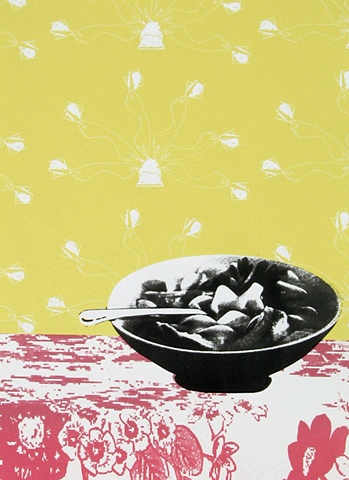 Bowl of Chicken Soup; to be consumed in a task that requires coordination and patience as saltines are buttered and dipped into the soup after three full spoons of soup are consumed
Screenprint
22x3o inches
< previous