The final element of this series consists of the digital print series entitled Sites. The prints in this series depict the abstracted spaces of the screensaver, which have been screen-captured or frozen into static stills. The prints allow the spaces inside the screensaver to be inhabited by the viewer and for the corridors and hallways to be noticed that are otherwise not discovered in the flythrough navigation. Not all of the screen-captured spaces are empty, however; some of the walls have been set up to be watched, like in the phrase “watching paint dry”. In some of these prints, the so called empty virtual spaces are inhabited by lawn chairs, recliners, mattresses, and comfortable amenities like a floor lamp, houseplants, a bowl of popcorn, a kettle and a mug. These are environments that seem familiar in everyday life, with seating that has a certain amount of comfort and suggests a prolonged period of time, but they face a blank wall. In these environments the conventional aspects of entertainment are absent, like a television, piece of art or a view that would typically be presented in front of the seating. With this said, the prints essentially set up the scenario for “watching paint dry” as a realistic possibility. In this way, these environments have a firm foothold in digital world through screenshots of the de-contextualized floors, ceilings and virtually endless sense of space, as well these environments have a foothold in the physical world through furniture and attention to human needs with comfortable seating, food and beverages. Ultimately, the environments in these prints align the natural with the virtual within one plane. They bring together the phrase “watching paint dry” and “watching a screensaver” into the same rhetorical space and in doing so question notions of entertainment, attention span, time constraints, purpose and the ability to watch nothing happen. 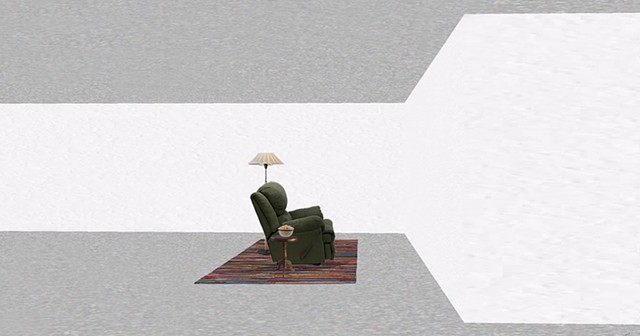